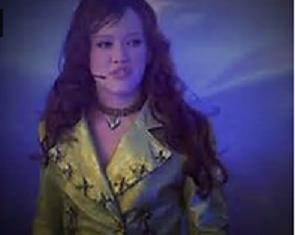 Isabella Parigi is an Italian pop star and a secondary character in the Lizzie McGuire The Movie (also played by Hillary Duff). Isabella and Lizzie look identical to each other, the only physical difference between them being their hair colors (Isabella's a brunette and Lizzie's a blonde) and the fact that Isabella speaks with an Italian accent.

Isabella and her singing partner/boyfriend, Paolo Valisari, were supposed to present a award at the International Music Video Awards, but they had a falling out, possibly due to Paolo's lip synching. To avoid being sued for a contract breach, Paolo took matters into his own hands.

Paolo meets Lizzie when she and her class where on a field trip to Rome, and takes notice to her resemblance to Isabella, and decides to use it to make it seem that Isabella's lip synching, telling her that it is required. The media takes notice and Paolo simply claims Lizzie is Isabella with dyed blonde hair.

Since Gordo was covering for Lizzie and tells their principal Miss Ungermeyer that he has been sneaking out on the trips. When Gordo heads to the airport, he meets the real Isabella and discovers the truth about Paolo. He explains to her what is going on and they head to the IMVA being held at the Colosseum, where they tell Lizzie the truth. At first, Lizzie refuses to believe it, but Isabella encourages Lizzie to trust Gordo, who she has known basically her entire life while she has only known Paolo for less than month.

Isabella and Gordo pull the plug on the record tape, exposing Paolo as a fraud. Isabella further humilates him by going on stage when Lizzie was already on. As Paolo leaves, Isabella introduces Lizzie to the crowd and has her perfrom her and Paolo's song What Dreams Are Made Of in her place.

Retrieved from "https://lizziemcguire.fandom.com/wiki/Isabella_Parigi?oldid=8433"
Community content is available under CC-BY-SA unless otherwise noted.